How to pick a problem worth solving - Issue #7

How to pick a problem worth solving - Issue #7

Picking a problem on the spectrum from "creating a market" vs "filling existing demand".

I've been updating both my personal and day job websites to be ready for Google's Core Web Vital update.

Performance scores were previously calculated with Lighthouse. Google is shifting away from Lighthouse and moving towards Vitals and there are quite a few differences. We could talk about the technicalities behind all of this, but it also serves as a reminder to fill existing market demand, not to create it from scratch.

From a business standpoint, it's important to note that Core Web Vitals are brand new metrics using a relatively new technology.

Front end real user monitoring existed prior to Google's CWV, but the practice is definitely growing. 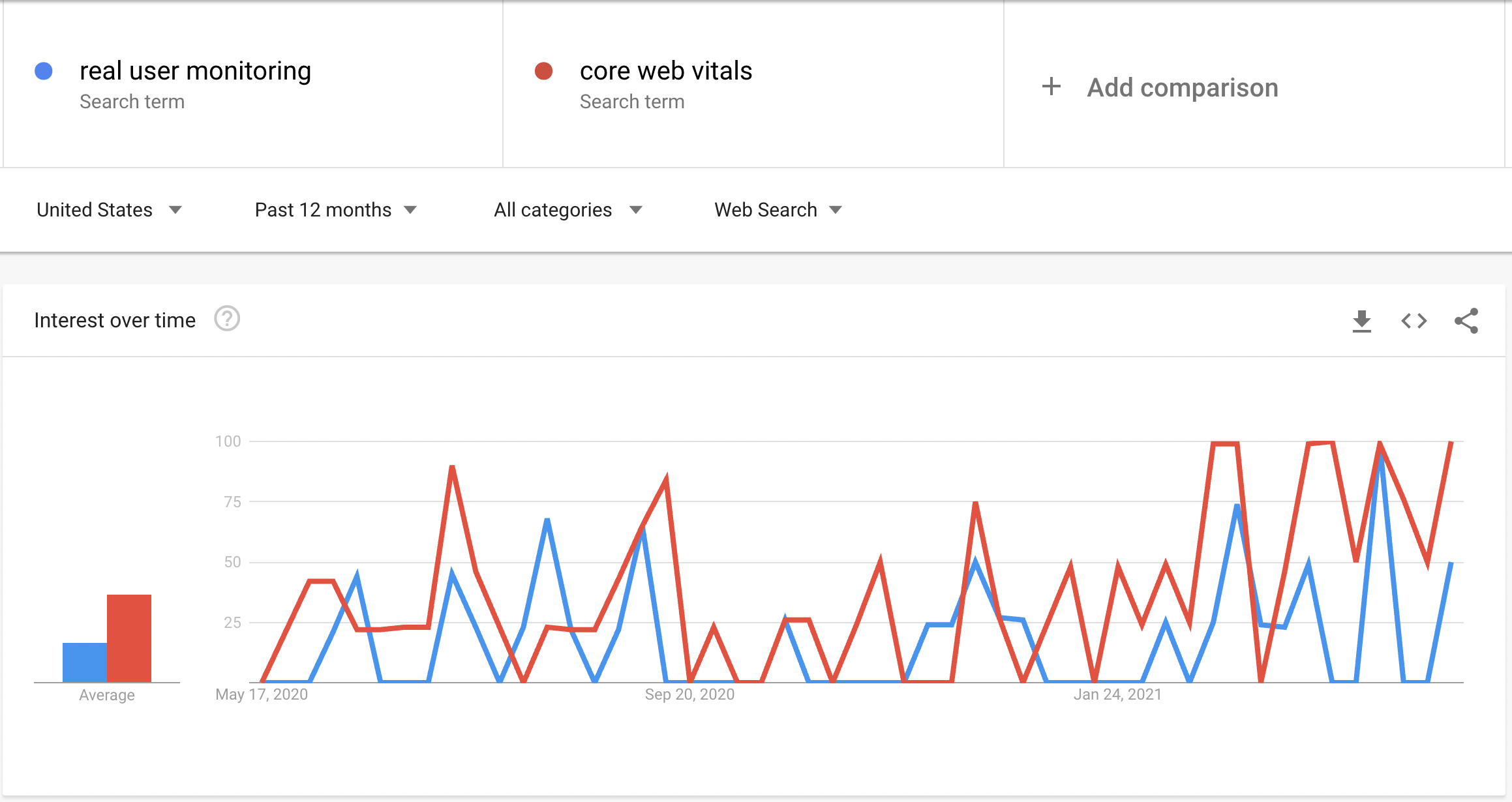 I might be reading into it too far, but these "real user monitoring" and "core web vitals" lines trending so closely is leading me to believe Google is single handedly creating this market.

Here's the thing, real user monitoring is a better way to monitor performance.

By measuring real user performance data, you get:

So why wasn't this a bigger market prior to Google's push?

One reason is that the web performance monitoring world follows Google's lead. The rules Google creates often define what the web looks like since we're all trying to rank on the first page of Google (reminds of a post by swyx on Reflexive McLuhanism)

The second is that the market needed to be educated (and incentivized) to use this new tooling. Old habits die hard, and so will the tendency to rely only on Lighthouse audits for perf. Google has spent countless hours educating developers, SEOs, and marketers about Core Web Vitals. They've hosted developer workshops, answered AMA's on Reddit, fielded tons of Q&A, and devoted tons of dev hours to building internal & external tools for CWV.

I don't think there are many companies out there besides Google that would be capable of this feat.

So is this a bad business decision?

Google can do this because it's massively profitable, has tons of market power, and has been in existence for over 20 years.

So who shouldn't try to define, educate, and then finally sell to a brand new market? You and me. Bootstrappers, IndieHackers, and soloprenuers. Creating a market from scratch.

So if I shouldn't create the market, should I only go after established markets?

Too early, you're not solving a real enough problem and people view you as a vitamin.

Too late, and there are large incumbents that will crush you as a solo dev.

Right on time and you have a pain pill for a unique pain that not many other tools can fix.

I was building Core Web Vital tooling aimed at developers when most of the dev community was not interested. Now that Google's deadline for CWV is near, I'm seeing a lot more activity in the market. Fingers crossed 🤞

Side note: you can totally go after established incumbents if you know what you're doing. I'm a first time founder and won't be trying that on my first go.

The Bootstrapper's Journey Weekly — drew.tech An email each week about the path to ramen profitability as a solo dev.

Last week I mentioned moving to a custom front end for this newsletter and I just shipped V1 on Tuesday. I'm already seeing some additional SEO traffic in Google Search Console which is exciting.

This issue is the first "headless" newsletter I've sent. Revue is used as the backend & sender. Definitely writing up a blog post on this soon.

This week I'm doing a full on Sales Safari for the FitVitals target customer. In the 30x500 course, you generally aren't supposed to come in with a full product idea as it brings a lot of bias into the process. I'm going to try to remain unbiased as possible.